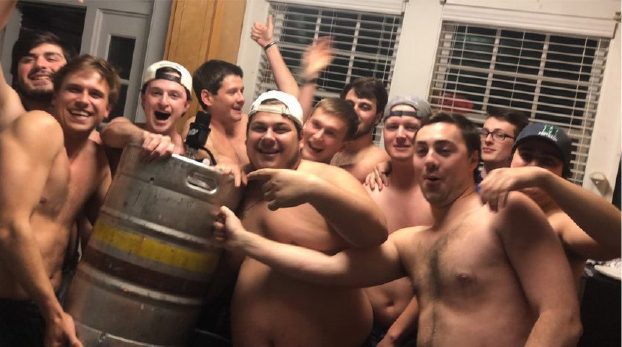 Beer Olympics is one of college students’ favorite traditions. It’s a combination of ruthless
physical competition and endless beer consumption. Just like the regular Olympics, Beer
Olympics involve utilizing multiple different skill sets to come out on top and get points for
one’s team. The rules are simple and the outcome is triumphant, but may leave those
participating with a hangover.

Drinking games are as old as games and alcohol themselves. Early drinking games were ones of
speed and endurance; participants would gamble for the drink itself by either consuming it the
quickest, (chugging), being the last member standing, or the last to relieve themself after
consuming a large quantity. Drinking games in ancient China involved exchanging riddles.

While drinking contests in America may have gotten their start in bars, in the early twenty-first
century they were predominantly played on college campuses. No longer were they simple
contests of speed and endurance, but rather complex games with specific names and rules.

Games such as Beer Pong, Ring of Fire and Flip-Cup pitted college students against one another.

Beer Olympics often involves multiple alcohol drinking games played in succession by teams of
people, ultimately leading to an overall winner. These teams may consist of a group of friends,
classmates, fellow organization members, family or neighbors. There’s no regulation for who can
and can’t play.

So here’s how to put on a great Beer Olympics (based on the opinion of GC students):

a. The events within Beer Olympics should be determined ahead of time to allow for
planning, and the order can be predetermined or randomized. Each team must
participate in each event, but not each player. At a minimum, a Beer Olympics
needs at least two teams of four people, but it’s highly recommended to use at
least four teams with up to six people per team. More importantly, all teams must
have the same number of participants and each player shall bring their own case
of beer, or throw down for a few kegs.

a. Although scoring methods vary, the easiest method is to give points based on the
number of teams. If one has 6 total teams, the scoring would be based on a 1-6 for
each event. The winning team gets 6, while the losing team only gets 1, etc. At the
end, the highest team wins.

a. Someone will need to keep everyone in line during the games. Competition brings
out the worst in people and drunk competition is even more dangerous. The
referee’s word is law! They are responsible for keeping track of score and
recording points on a bracket board. Penalties include, but are not limited to:
i. Cheating
ii. Spilling beer
iii. Changing the music
iv. Not respecting house rules
v. Breaking a glass (although, you should really use plastic)
vi. Damaging a ping pong ball

a. Holding an opening ceremony where teams walk out to theme songs is optional
yet highly encouraged. Teams are encouraged to represent their theme through
costumes and decor (i.e. a Power Rangers team).

a. As stated prior, teams should decide on the amount and types of games for their
Beer Olympics beforehand. Here are popular games that are encouraged by the
GC students (21 and up of course)!:

i. Beer Pong: a classic!

1. Beer Pong is generally played by teams of two in which each team
takes turns throwing a table tennis ball into the other team’s cups.
Once a ball lands in a cup, the cup is taken away and the opponent
then drinks the contents of the cup. If both teammates hit cups, the
balls are rolled back and they get to shoot again. The team that
successfully hits all of the opponent’s cups wins the game.

1. Survivor flip cup is an intense twist on the classic party game.
During survivor mode, two teams face off. The losing team has to
remove a player from their side before round two. This game
continues until one team is defeated. This way, you drink more
beer, thus upholding the standards of the Beer Olympics.

iii. Dizzy Bat (can be played as a team or individually)

1. Each member of the team must chug their dizzy bat, spin, hit the
can and run to a certain point. If a team member doesn’t hit it, or
doesn’t make it to the end point, it counts against the team.

1. Cards are passed one at a time at a fast pace between players until
someone has 4 of a kind, causing everyone to rush to grab spoons.
The loser chugs!

1. It’s as simple as it sounds! Each team hides a number of beers that
equals that of another team. Each team will look for the beers
marked for their team. Whoever finds all their beers first wins and
other teams follow.

a. This is where the medals are given out. Gold, silver, and bronze. Everyone else is
out of luck. If teams are feeling super classy, end the games with a champagne
toast!

Beer Olympics are all fun and games, but make sure to drink responsibly. The best part:
gathering with friends and making memories that you’ll (hopefully) never forget! 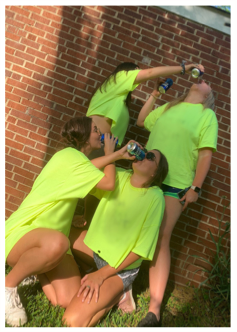 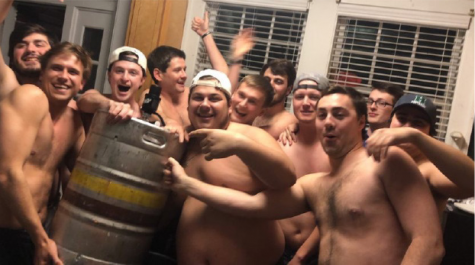