‘YOURS TRULY’ WITH THE BASILIOS 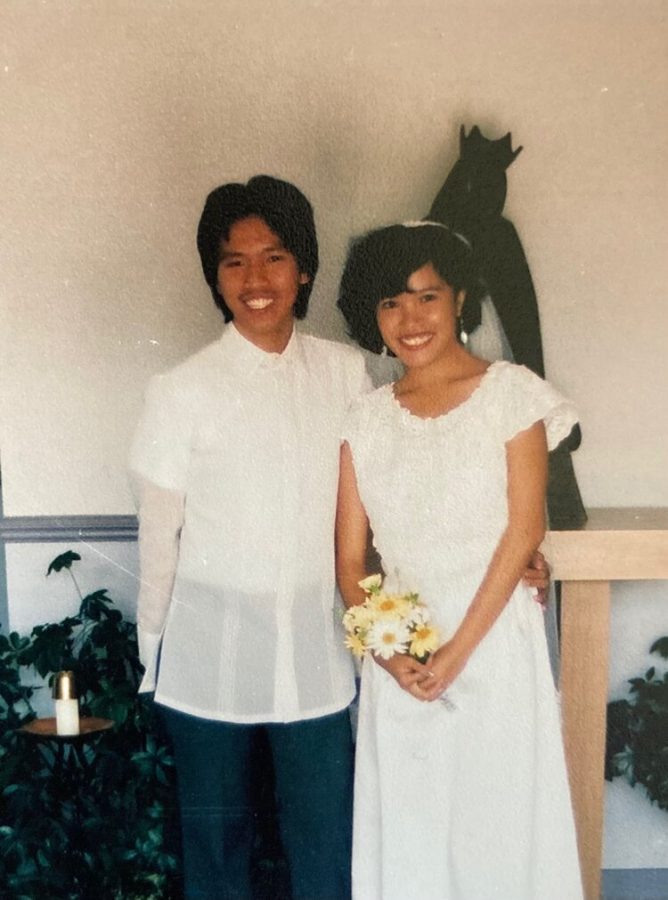 (Milledgeville, Ga) — Cesar and Victoria Basilio have a story that seems straight from a Hallmark movie script.

The star-crossed lovers met while growing up in the Philippines. They lived on separate islands and spoke different languages. How did these two go from a quick conversation in highschool to the couple married for 36 years? Like any good Hallmark movie, the story starts with the “meet-cute.” The Basilio’s met in high school, where Cesar yelled to Victoria from a staircase about joining a club he had created. She yelled back no, and they did talk but once more in high school. Fate would have it that they were attending the same college, and while pursuing their undergraduate degrees at The University of the Philippines, they found time to get to know each other.

They slowly started to get to know each other while talking between classes. They would sit and talk for hours about deep stuff, says Victoria. They had a tight-knit group of friends in college, and like any Hallmark movie, there has to be another woman. So, Cesar’s buddies tried to set him up with a girl at the end of the year party at the university. Not interested in the girl, Cesar avoided her by asking Victoria to dance instead. They ended up dancing and talking the whole night. Throughout the night, Cesar realized that he had feelings for her and made a plan to ask her out but needed to use the restroom first.

“I got locked in the bathroom,” he said, laughing. “I was stuck in the bathroom for about an hour and a half or something, and I came out she was gone.”

But he couldn’t just let her go, so later he called her and not only asked her out on a date but asked her to be his girlfriend. They went out on a dinner and movie date the next day and watched Silver Streak. Continuing to be bold, he kissed her. “It wasn’t a very good kiss,” Victoria said, laughing. The two agreed that it was too dark to see anything.

The date ended, and the next day she left for her island. The two dated the whole summer seeing each other only once when the two went on a date in her hometown with her entire family. When they got back to university in the fall, Victoria had gotten cold feet.

“I made up my mind that I was going to break it off with him. I had all these reasons, and I gave my speech, and he looked at me, and he said ‘no!’”

“I completely ignored it,” Cesar interjected. He convinced her that they needed to give it a chance. “I realized pretty much then that this was the one,” Victoria said.

They dated for seven years finishing undergrad, and even went to school for their PHDs. They had a plan to get married in Victoria’s hometown after they finished graduate school, but in Hallmark fashion, something needed to stir up the story. Everything they planned changed with one phone call.

Cesar answered the phone; it was Victoria’s dad. He told him that he needed to marry Victoria now. “Why wait?” he said. Unbeknownst to the couple, Victoria’s father’s cancer had relapsed, and he wanted to see that his daughter was married before he passed away. Cesar turned to Victoria and told her that they would get married as soon as possible, and she agreed.

There was no fancy engagement ring until years later; the two made to get married in the Catholic Church.

“I made my dress; I mean, it was that way. You know, we were poor grad students,” Victoria said.

Her mother sent traditional coins and a sparkly top for the dress from the Philippines. It took a couple of months to collect something old, something new, something borrowed, and something blue. In the Philippines, it is traditional to have a sunrise wedding. Unable to convince the priest to have the ceremony that early they agreed to 9 am. On the morning of their wedding, they drove to the church ready to get married and pulled on the church’s door. The door was locked, and the priest was nowhere in sight.

Cesar walked around to the rectory where the priests lived and knocked on the door. A tired man, Father Gallager, emerged still in his pajamas, holding a cup of coffee. He thought that their wedding was at two in the afternoon. Realizing his mistake, he quickly got ready.  Since the party was so small, they ended up getting married in the adoration chapel.

They all entered the chapel together, so there was no magical moment where Cesar got to see Victoria walk down the aisle. The one thing the two said about that day was that there was no stress. “It was very relaxing,” they said.

Married life was more complicated than Victoria expected. “It is funny,” she said. “We dated for seven years before getting married, and you would think you know someone, but living with them is a whole other story.”

The two have survived the past 36 years of marriage with some key takeaways.

“I know what you are going to say about me,” said Victoria. There was a long pause before Cesar shyly says, “she’s messy,” the two laughed and nodded in agreement.

They learned to make safe spaces of order for Cesar, a neat freak, and keep untouched piles for Victoria. They agree that they will stay together through thick and thin.

“Love is not a feeling; it’s a decision,” said Cesar.

Cesar became a Deacon in the Catholic Church 17 years ago, and Victoria recently retired from her job as a school librarian. Now, almost 37 years later, their Hallmark romance continues, and they are still as happy as ever together and plan on having the big wedding Victoria always wanted someday.